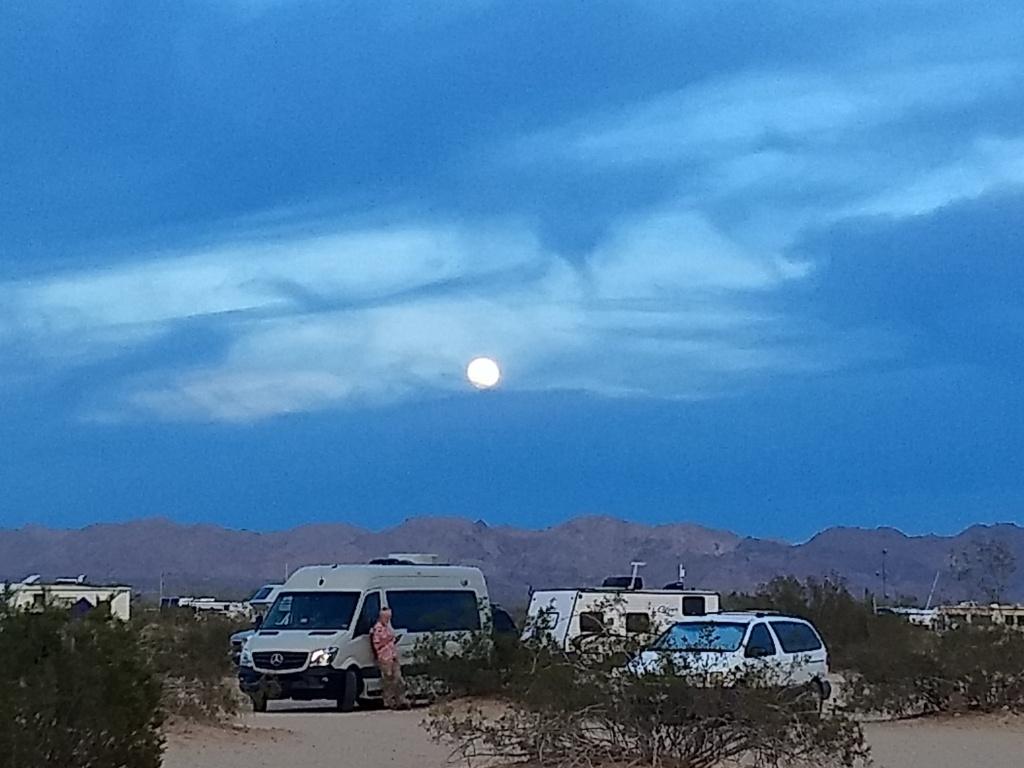 After all the fun we had at last year’s Rubber Tramp Rendevous (RTR) in Quartzsite, it was an easy decision for us to attend the 2018 RTR as well. This year’s event was another huge success, despite the many challenges for the organizers that go along with the growing popularity of the gathering. 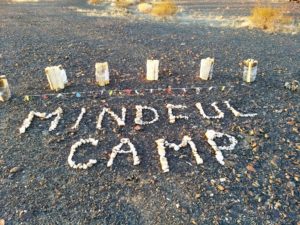 We reconnected with friends we made last year and enjoyed making new friends as well. With roughly 3000-4000 attendees (we have heard all kinds of numbers, so who knows how many were there really), it was much larger than any RTR before. We saw a lot of complaints online about how big it has gotten and how a few people were inconsiderate, ruining things for everyone. But honestly, that was not the experience we had. Just like last year, we saw human kindness everywhere we turned. People helping each other out just because. A large group of volunteers working tirelessly to provide a great event for everyone, friendly folks representing the BLM, interested in truly working with us and as always a generous Bob Wells, sharing information and bringing people together.

Attendees organized activities around different topics, there was RTArtCamp for those who wanted to create art, there was MindfulCamp for those who were interested in Meditation, there was MusicCamp, Foodie Meetups, YouTuber gatherings and a bunch of other things, that I am sure I missed most of, as there were a ton of happenings outside the official schedule, which was pretty full itself. There was so much sharing of passion projects going on outside the official schedule, it was truly impressive! The event even made it into the New York Times and even had some international coverage in the German newspaper Die Zeit, wow! 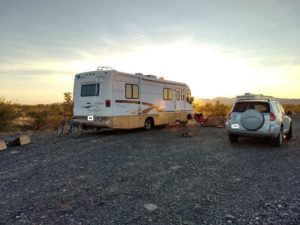 We had parked one wash south of the official area, far away from the main event, because we use our generator for about 30 minutes in the morning (we don’t really like using it and use solar for the rest of the time, but for practical reasons 30 min generator use a day is what works for us). The rules said no generators in main camp and although not everyone was adhering to the rule, we didn’t want to be the ones to break it. With that many people cramped into an area, it’s important to follow the very few rules set for this gathering and it was also important to us to respect Bob’s request. 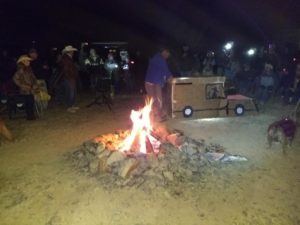 Being parked that far away gave us a bit more space, but also meant that we missed out on quite a bit of the socializing in central camp, especially some of the spontaneous off schedule gatherings . A FIRE friend from Phoenix joined us in our camp spot with a friend of hers from out of town, which was great. And little by little we also met a few people within our own “neighborhood”. We definitely saw quite a few smaller neighborhood groups forming this year than at the previous RTR, encouraged by the sheer size of the group. On the last night many people got together for “Burning Van” in the central camp area though. The BLM folks had expressed some concerns, when they heard, we’d be burning a van that night, but it sounds like they got a good chuckle out of that when they saw the actual cardboard “van” many attendees had signed going up in flames that night. 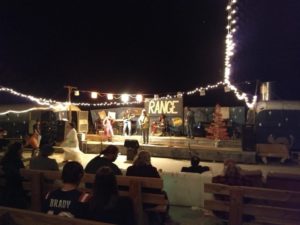 In order to catch up on the socializing part, we decided to join a group of RTR attendees heading to Slab City after the RTR. Our first visit to Slab City, back in October 2016 all by ourselves had been a positive experience, so we did not feel the need to go for the safety in numbers thing, which was the motivation for most first timers who came along. We went, because we wanted to continue to experience the RTR spirit in a much smaller group.

It definitely is easier to get to know people in a smaller crowd, especially as the group thinned out pretty quickly over time. Slab City was a lot more fun on our second visit. The people who organized the encampment had been to Slab City several times before and managed to show us aspects of the area we had previously missed. They also knew some of the regulars, which helped us to better connect with the community. 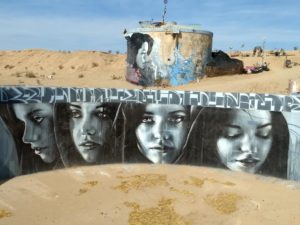 One day we went on a walk with Randy Vining (a poet well known in the RTR community, here’s a link to his book with some of his poems), one of the two organizers of this Slab City group camp event. Randy, with his charming ways, managed to get us invited into one of the tanks that has been converted to a house. Those tanks with their beautiful artwork already look amazing from the outside, but thanks to Randy we got the rare opportunity to see one of the tanks from the inside. I did not bring a camera on that walk, so unfortunately I don’t have any pictures from the inside, however Randy was able to take a few and has published them on his blog.

It was really interesting to chat with the couple who lives in the tank and hear their story. They walked all the way to the Slabs from the East Coast. Fascinating people who live in a truly unusual house. I went back to the tanks to take a few pictures from the outside a couple of days later and chatted with them again. Some idiot had tagged the amazing artwork on the outside of their house, which I was quite upset about. Those tags weren’t there when we visited earlier and I asked them if they knew what happened. They said that a neighbor had probably done this and he had an idea who it may have been. What a shame! 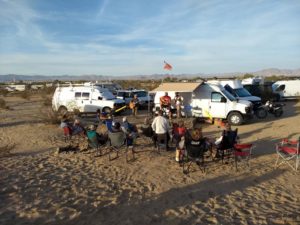 This second visit to the Slabs was a truly amazing experience! Several people in our group are musicians, so we were treated to live music pretty much every night, either at one of the many Slab City venues, such as The Ponderosa, the VIPer lounge, The Range or the Oasis, or in our own camp area. One guy in our camp even built a small stage in front of his van and invited musicians over to play, many of whom played their own original music. How cool is that?! CB, the main organizer for the Slab City camp, recorded some of these artists in his Rollchording Studio (a mobile Studio in his Airstream trailer).

I don’t know how many times I can mention treat in one blog post, but getting to witness some of these recordings and listening to the outcome: major treat!! Really made me wish I had a tiny little bit of talent for something. Seriously, you don’t want me to sing or play any kind of music. I couldn’t get a tune right if my life depended on it, which makes me even more appreciative of people with talent. Even better: people with talent who chose to share it with others!! If you are one of those people and would like to get a recording of your music to share with the world, check out CB’s Rollchording facebook page and see if you can find him somewhere on the road. 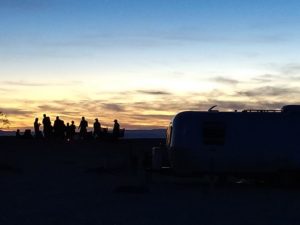 Every night we had a sunset chat on the dunes, discussing varying topics about life the universe and everything. One evening we saw the ISS move over us, one day we had a full moon / blood moon. Once in a while Randy regaled us with one of his poems. There was always something to be seen or heard or discussed. East Jesus had a lot more things to discover compared to our previous visit as well. We also got to see the Niland Tomato Festival Parade, greatly enriched by the enthusiastic participation of Slab City residents. I seriously hope the local chamber of commerce finally starts to appreciate what a gem of a community they have nearby, that draws people to this barren area year after year! 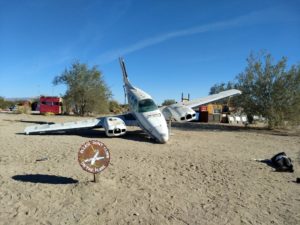 We stayed longer than initially planned and enjoyed time spent in the much smaller core group that had condensed over time from the masses of people who had come along for the first few days only. As much as I wanted to stay a little longer, after a little over three weeks it was time for us to move on. We had planned to meet friends in Death Valley in March and needed to get a few things taken care of on the way. 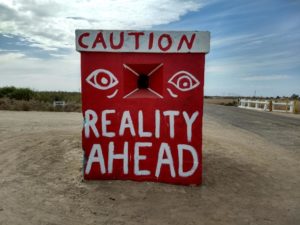 We are already looking forward to the 2019 RTR and hopefully another Slab City encampment!