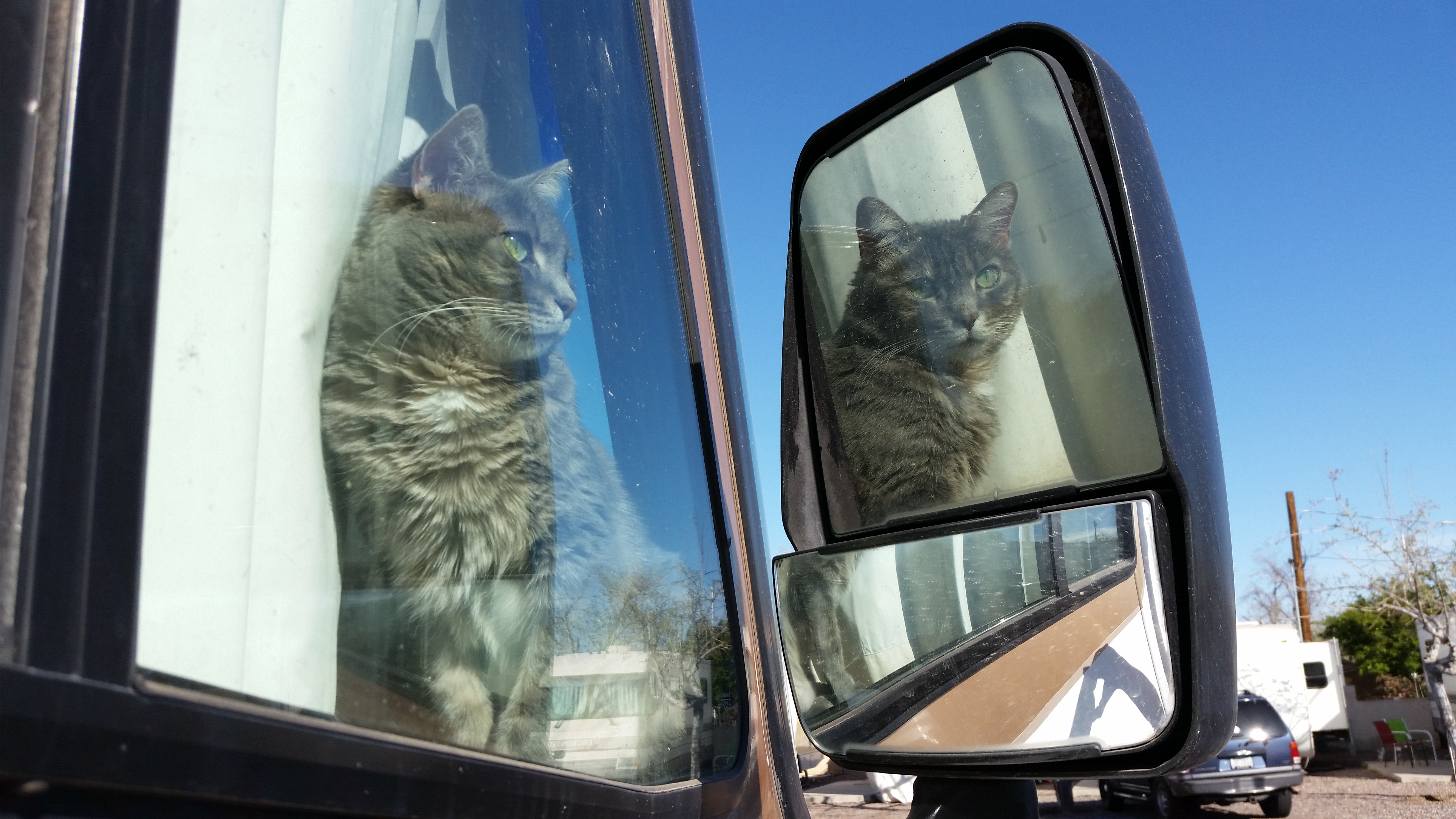 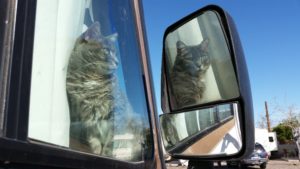 My cats and I have recently downsized from a 4 bedroom house into an RV with my DH (who actually upgraded from a much smaller 19ft RV into our new-to-us joint 32 ft home). My biggest concern was not the downsizing itself, but how my cats would adapt to the change.

Before moving, I did some research on the topic. There are a lot of people out there RVing with pets, many of them have successfully managed to get their cats and dogs used to riding in the RV. 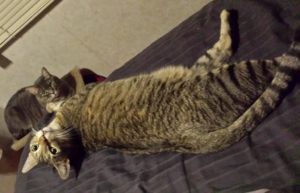 My kitties are my family and it was out of the question to not take them along. Had they not adjusted I seriously would have had to rethink my plans of living in an RV. When I adopted them, I accepted the responsibility to provide them a forever home, so I wanted to be absolutely sure that this will work as well for them, as it will for us humans. DH was fully aware that any RV we consider would not have only have to accommodate us, but also the needs of the furry family members. When shopping around for RVs we always considered them with an eye for kittie hiding spaces, a place to put the litter box, scratching posts and enough storage for their “stuff” (I admit they may be a tad bit spoiled).

We lucked out in the sense that we did not downsize into a smaller place after selling the house, as originally planned. Our timing worked out in such a way that we could actually downsize into our RV directly, which gave the cats lots of time to get used to the new surrounding. 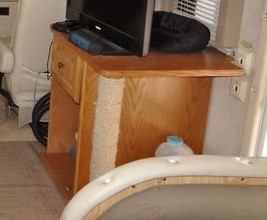 After selling my house, a friend kindly agreed to let me keep the babies at his place, while we catified the RV. The furry RVers even got their  own custom cabinet that holds the litter box, a drawer for supplies, a scratching post and a cat bed on top, for perfect cat TV watching! 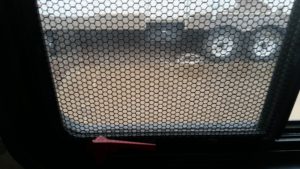 We also reinforced all screens with a metal mesh, which was a TON of work, as we had to measure, cut to size and de-grease the metal, then paint it, let it dry, apply a second coat of paint BEFORE we even could attach it to the windows and doors. We did this because we thought destructive little claws may cut trough the insect screens like a hot knife through butter. Long story short, despite spending tons of time attaching those to windows and doors with hot glue (patiently watching glue dot after glue dot dry is soooo exciting!!), they all came off one by one after a while. We have given up trying to reattach them by now. Major catification fail. You live you learn!

The good news so far however is that the cats have been respectful of the screens and have not tried to scratch those YET. I wish I could say the same about the faux leather on the dashboard, but given the choice we all prefer intact screens for sure.

As soon as the catification projects were completed all of us moved into the RV, whilst it was still parked at an RV park in the city. I was still wrapping up things at work, which took a little while, so the cats had plenty of time to familiarize themselves with the new house before it actually started moving. We also planned our first few trips in a way that their surroundings would move for only very short periods of time at a time, so they could get used to the experience. Slow introduction is key with feline family members in my opinion, whether it is the addition of a new pet, a move or anything else that has a major impact on their habit.

Calming aids? Anything that helps! Bring it on!

My cats have very different purrsonalities, therefore I was not quite sure what to expect. I just wanted to make things as easy for my babies as possible, so I stocked up, literally on EVERYTHING I could think of. I used a Feliway diffuser in the front area of the RV as well as both Feliway spray and Sentry Calming Spray for Cats on the bedding and around the entire RV each time before the motor was started.

Linus, my “boy” is the more skittish of the two, so he is usually also wearing a SENTRY Calming Collar for Cats while the house is in motion. I admit, I may have gone a bit overboard at first, but I really wanted to do anything I could to ease them into the experience. 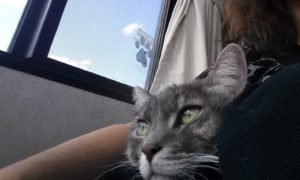 Thank cat, they got used to the whole riding in an RV thing pretty quickly. Now they already know what is about to happen and when they hear the motor being started they head right to the bed in the back of the RV and hide under the blankets. Emily, my “girl” (pictured above) is more daring than Linus, so she sometimes prefers to ride on my lap rather than hanging out with Linus under the blankets! We now only use the calming collar and the Feliway spray for longer rides.

As soon as the RV stops, both of them come out immediately, demand treats for their bravery and then hang out, cuddle and chill, as if nothing ever happened. At the beginning I gave them special calming treats before and after a drive (did I mention I was overly cautious? OMC! I sure was), but now they are absolutely fine with their regular favorite junk food treats (they just don’t seem to like the healthy stuff although I’d rather give them that), or even better: chicken lunchmeat! No skimping on treats, or I’m in trouble no matter how short the ride! 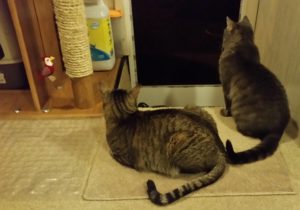 They love getting new CAT TV channels on almost a weekly basis and take in all the new sounds and smells behind the open screen door. Squirrels, rabbits, birds even deer….their entertainment is top notch these days! 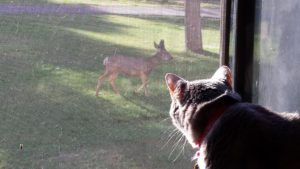 We also brought along a kittie play pen for for them, to use when we are sitting outside, but so far haven’t gotten around to using it yet.

Chilling like the pros, what was I worried about?

All in all it was a big relief for me that getting them used to travelling in the RV has worked out this well. 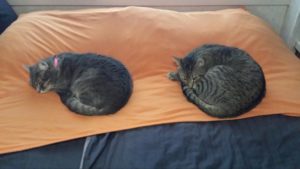 They love chilling on the bed and they still get plenty of exercise chasing each other across the dashboard over the seats and back into the bedroom. They don’t seem to miss the big house one bit. When I was home, they usually were right where I was anyways. I would have at least one cat on my lap, my feet or right next to me at all times. Now in the RV it really is no different. I love that I can spend more time with them and they like to be close to me! For me definitely HOME is where the cats are no matter where the home is!

This post contains affiliate links, which means if you purchase an item via one of these links this blog may receive a small commission. This is at no additional cost to you, so if you chose to use our links, thank you for supporting our blog.

This website uses cookies to improve your experience while you navigate through the website. Out of these, the cookies that are categorized as necessary are stored on your browser as they are essential for the working of basic functionalities of the website. We also use third-party cookies that help us analyze and understand how you use this website. These cookies will be stored in your browser only with your consent. You also have the option to opt-out of these cookies. But opting out of some of these cookies may affect your browsing experience.
Necessary Always Enabled
Necessary cookies are absolutely essential for the website to function properly. This category only includes cookies that ensures basic functionalities and security features of the website. These cookies do not store any personal information.
Non-necessary
Any cookies that may not be particularly necessary for the website to function and is used specifically to collect user personal data via analytics, ads, other embedded contents are termed as non-necessary cookies. It is mandatory to procure user consent prior to running these cookies on your website.
SAVE & ACCEPT
%d bloggers like this: