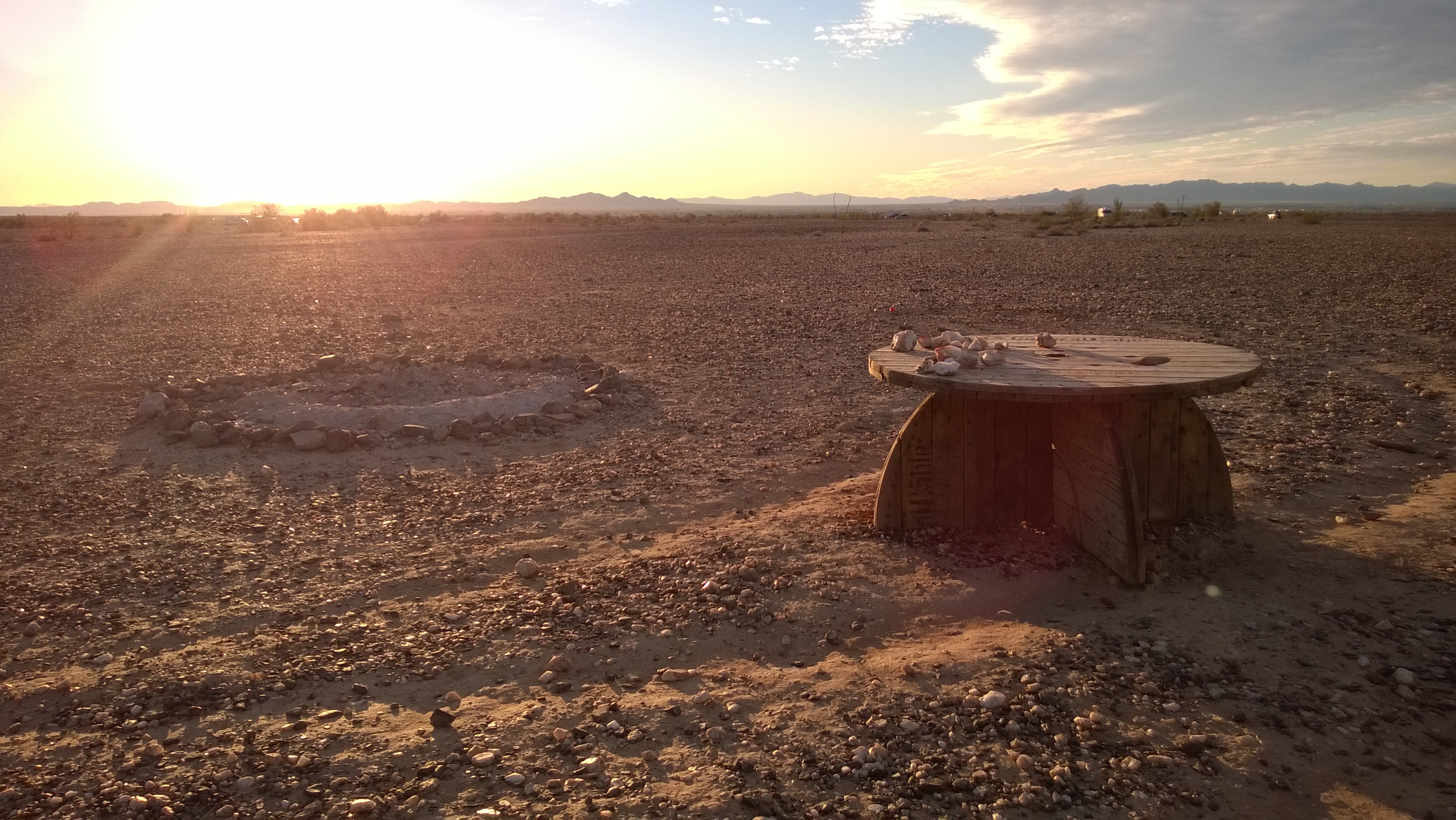 When we started out on our nomad life, I was a bit worried I’d miss my friends while on the road. I don’t make new connections that easily and when you are nomadic, it’s even harder to do. Most of my close friends I have known for a long time and even though we are spread over different parts of the world and don’t see each other all that often, every time we manage to meet, we just pick up where we left off the previous time.

Social media has made it a lot easier to stay in touch, over large distances, although I am not a huge fan of Facebook.

While I do miss my friends, so far the opportunities to meet interesting and inspiring people on the road, have been great. RVers tend to be a friendly bunch in general and many will wave at you and say “Hi” when you cross their path. However, I was hoping for a bit more of a connection than just a smile and waving hand. I am always interested in hearing people’s stories (ok, call me nosy) and finding out more than just where they are from and where they are headed next.

In January we spent two weeks in Quartzsite, AZ, to attend the Rubbertramp Rendevouz (short RTR), organized by Bob Wells of Cheaprvliving.com. The RTR is a gathering of people from all walks of life who live in all kinds of vehicles from cars, to vans to RV’s to self built custom rigs and everything inbetween. It is all about sharing experiences and helping each other out.

The event had a somewhat official program, with talks on various subjects that are of interest to nomads like ourselves (jobs for nomads, healthcare, how to get an address, boondocking etc.). TDA jokingly said that after 7 years of fulltiming he didn’t need any lectures on boondocking and such, but as he enjoyed mingling with folks anyways, my guess is that he just did not want to get out of bed that early. I eagerly embraced the opportunity add to my knowledge by learning from others and make new friends, while he slept in and joined the afternoon meetings.

Every morning I took my coffee and my chair to the main area to hear what folks had to say about solar cooking, boondocking, favorite gadgets and so on. I really liked the community aspect of sharing information. People would chime in with their experiences and many seminars were actually participant led – show and tell style discussions. My two favorite meetings were the first Womens Meeting and the Tin Can Seminar.

Hearing other women’s stories and seeing women reaching out to each other was heart warming and in some cases heart breaking too. Witnessing humanism in action is such a beautiful thing. Experiencing that most people, given the chance, will help and care for each other is very reassuring. That meeting left a deep impression on me and I went away with a feeling of gratitude and a renewed trust in humanity. Actually that was the case for many situations at the RTR, the many small and in some cases larger acts of kindness happening everywhere were truly energizing!

The tin can seminar was super fun. Over a few days, all kinds of questions were collected in a tin can. Anybody could submit any kind of question they wanted. One person read the questions to the group and the group answered the question in their collective wisdom. Sometimes the answers were hilarious, sometimes they were philosophical and often times also really helpful. People asked ANYTHING from how to meet people, to good boondocking spots in certain cities, to good books to read, working on the road etc.

I left the RTR highly energized (with lots of ideas for blog posts, that obviously never made it past draft stage), happy and at peace.

Right after the RTR I also attended BLOGGERFEST, an event organized by Lorne and Susan of “A Place Called Away“to bring together RV bloggers. I totally would have missed it, had my friend Shadowmoss not pointed it out. It was fun to meet with fellow RV bloggers who are well established in that niche, a niche I had originally not planned to be in myself. One of them even turned out to be a reader of my other blog. 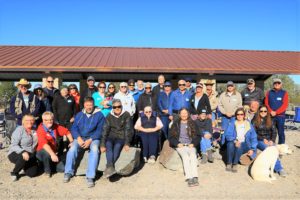 After leaving Quartzsite we moved a few miles further West on to Ehrenberg, where a lot of other RTR participants were headed as well when their 14 day BLM permits for Quartzsite were up.

The first night we arrived, we went for a walk, to check out the area and to see if anybody we had previously met was nearby.

On our walk, I found a table, in the middle of nowhere, just sitting there, besides a huge fire ring. A really big, really sturdy table, that somebody had built from a wooden cable drum and left it there for people to use. Whereas leaving stuff behind on BLM land is frowned on, this thing was clearly different. It was not discarded trash. Someone had purposefully built this with, probably by upcycling “trash” that had been left in the desert, with the intend to leave it for others to enjoy. 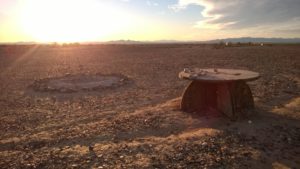 As I was already missing some of the new friends I had made during the RTR, I figured this would be the perfect spot to arrange for some social time. So I went to on the forum and told people about the table and that would be there on a particular day at a particular time with my chair and some snacks to share.

I figured the worst that could happen is I would be sitting at a table in the middle of nowhere with a bunch of muffins, chips and crackers, taking in the beautiful landscape and eating it all myself. It was a risk I was willing to take.

But it turned out, I didn’t have to. About 30 people showed up with their chairs, drinks and more snacks, many of whom were camped out nearby, but never had realized there actually was a table.

While we were hanging out, chatting and catching up, one of the gals mentioned that she may be organizing another gathering at the table the next day, as some of her friends were planning on showing up later with some BBQ supplies.

When I checked the forum later that night, sure enough, a BBQ was announced for the next day. We had to run some errands in town and arrived a little late, so things were winding down by the time we got there. But I was all giddy to hear that even more people had showed up for this than the previous day. Some people actually also decided to camp out right by the table. 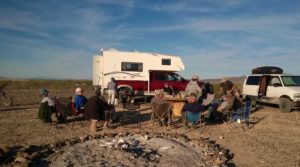 We had to leave the area soon after that second social event, due to a family emergency, but when I got around to checking back on the forum a few days later, I realized “THE TABLE” had become the new gathering place for folks camped out in Ehrenberg pretty much on a daily basis. People would put useful stuff on there to give away for free. Others would offer to meet “at the table” to help each other out with things they needed done on their rigs. The “tribe” had come together again and although we weren’t there to experience all of it, it felt kind of awesome to know that I for once had a teeny tiny part in establishing a resource of sorts for the community, that had given me so many rich experiences over the past weeks. I have absolutely no idea who built this table and left it there, but if you ever read this THANK YOU!